Lake Garda has an area of 370 km2, 50 km3 volume, and a maximum depth of 346 m. The lake is an essential water supply for agriculture, industry, energy, fishing and drinking. It is an important resource for recreation and tourism due to its landscape, mild climate and water quality. The catchment of Lake Garda is instead relatively small in relation to the lake area (6:1) and mainly composed by sedimentary rocks.

In this case study, we use the topographic delineation from the E-HYPE model and extract the domain that corresponds to the Lake Garda basin. According to E-HYPE, nine sub-basin contribute to the lake (Figure 2). In the model, the total basin covers an area of 2100 km2, with the lake covering an area of 360 km2. Analysis of soil information shows that most of the area is characterized by shallow soil type. Land use is quite heterogeneous with water bodies (17% of the basin is covered by the lake), forecast and open lands covering a large number of the basin. Internal discussion with local partners verified the correct delineation of the E-HYPE model in the basin. The model can adequately capture the river inflows in the reservoir. However, local refinements currently focus on tuning the model parameters to fit in-situ observations and hence improving the representation of the physical processes. A database of in-situ and EO products (snow depth, fractional snow cover, snow water equivalent, evapotranspiration, water levels, discharge etc.) is available at CNR’s database, which are used here for the scientific experiments, which involve the application of different data assimilation algorithms at different variables. 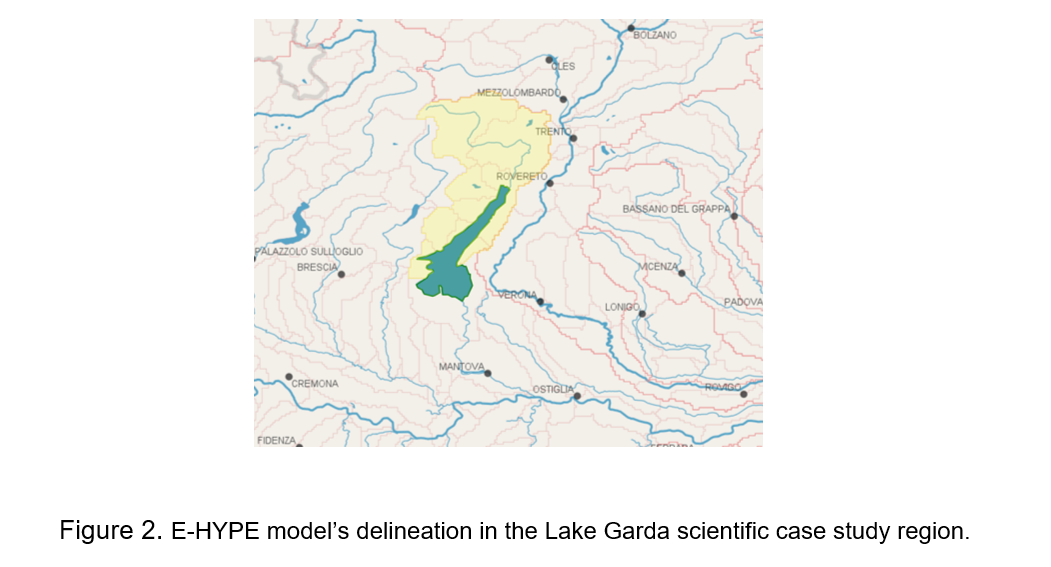 Precipitation occurs throughout the year either as rainfall or snowfall. Snow occurs in the headwaters due to the high altitude, yet the temperature close to the lake is much less and results into high evaporation rates. The inflows to the lake are quite constant during the year, however there is strong inter-annual variability driven by precipitation’s inter-annual variability (Figure 3).

The HYPE model (Lindström et al. 2010), a semi-distributed and process-based hydrological model, is forced by daily precipitation and temperature and then calculates flow paths in the soil based on snow melt, evapotranspiration, surface runoff, infiltration, percolation, macropore flow, tile drainage, and lateral outflow to the stream from soil layers with water content above field capacity. Calculations start for the Hydrological Response Units (HRUs) in each sub-basin. The HRUs in HYPE reflect a unique combination of soil type and land cover, which are assumed to govern the flow paths and discharge from soils. A HRU has a set of parameters specific for the soil type/land cover combination, which is not catchment-specific but distributed all over the model domain. The HYPE model has been setup at the pan-European domain and named as E-HYPE (Hundecha et al., 2016).

Here we use the Ensemble Kalman Filter assimilation technique, which constitutes a stochastic formulation of the original Kalman Filter and simplifies the problem of the nonlinearity of the process by using Monte Carlo simulations. To increase the efficiency of the filter, the ensemble member generation proposed by Turner et al. (2008) is applied.

Figure 4 shows the KGE metric of agreement (overall agreement) and its decomposed terms (agreement in timing (r), volume (beta), and variability (alpha)) between the EO products and E-HYPE simulations (Gupta et al., 2009). In Lake Garda, snow is not adequately represented, and only FSC in the high-elevated regions is well captured. In general, the high variability in the snow conditions over the region seems to affect its correct representation. The agreement in the ET and PET also decreases at elevated regions, probably due to the large elevation range in this watershed. 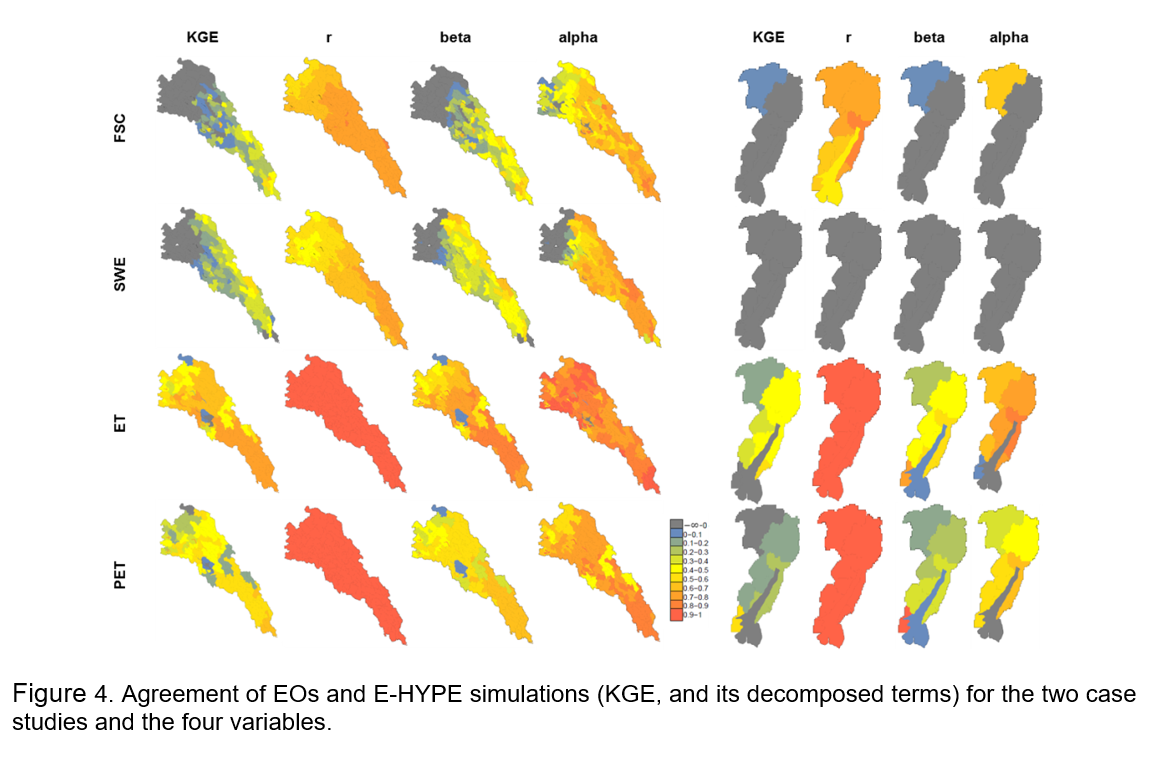 This study shows the potential of EOs to improve streamflow performance under certain conditions, and also point towards structural inconsistencies. The assimilation of EOs in hydrological modelling can also secure a right for the right reasons model. This opens the opportunity to produce water information systems and decision support tools based on near real-time EO products, setting a step forward in operational services.