The Umeälven river system (15000 km2) is highly influenced by snowmelt runoff. Two main branches, one nonregulated and one impacted by regulation at hydropower reservoirs and power plants, run in parallel from west to east. Forecasts of runoff volumes, together with insitu and Earth Observation products (snow information, water levels, runoff, discharge), are key inputs to the decision models of the hydropower companies when planning daily production based on the energy market.

The river Umeälven is a typical north European catchment highly influenced by snowmelt runoff. Two main branches, one non-regulated (southern branch and the one considered in this project, and from here onwards referred to as Umeälven) and one heavily influenced by regulation at hydropower reservoirs and power plants. Both are running in parallel from west to east, with the upstream areas in the mountains on the border between Norway and Sweden and the outlet in the city of Umeå at the coast of the Bothnian bay. The river is partly dominated by high mountain basins and forest areas. In the area, forecasts of runoff volumes, together with ground based and remote sensing snow cover monitoring, are key inputs to the decision models of the hydropower companies when planning the daily production based on the energy market.

In this case study, we use the topographic delineation from the E-HYPE model and extract the domain that corresponds to the southern part of the river in order to conduct the scientific experiments (apply data assimilation schemes for a number of Earth Observation (EO) products). According to E-HYPE, the Umeälven River is represented by 75 subbasins covering an area of about 15000 km2 (Figure 2). Forests and open land with vegetation are the dominant land use types, whilst moraine is the dominant soil type. The E-HYPE model is tested over this region and proven to be adequate for hydrological forecasting investigations. Hence there is no intention to tune the model parameters due to the model’s adequate performance. A database of in-situ and EO products (snow depth, fractional snow cover, snow water equivalent, water levels, discharge etc.) is available at SMHI’s database, which is used here for the scientific experiments, which involve the application of different data assimilation algorithms at different variables. 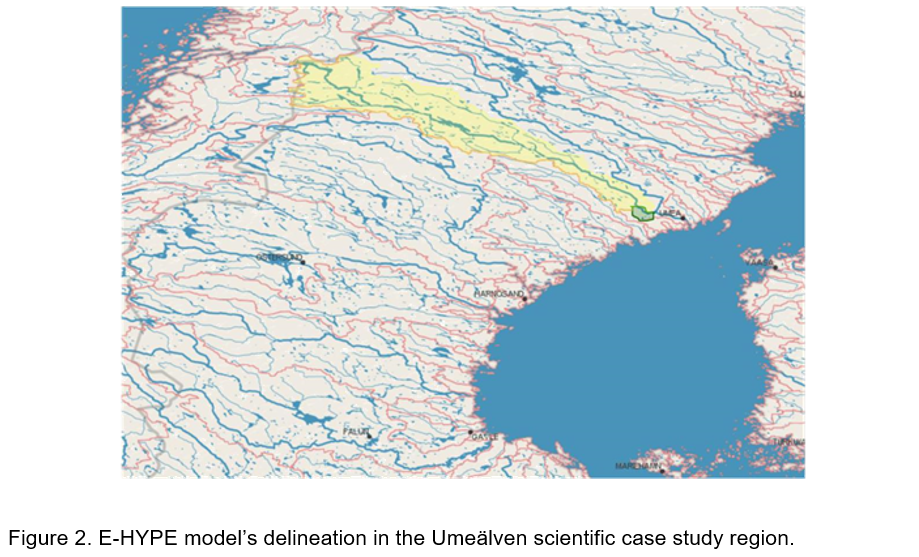 Precipitation occurs throughout the year, however in different forms, i.e. rainfall or snowfall, due to the generally cold climate (in the winter months) and high elevation differences. Temperature has a strong seasonal pattern, and this results into a distinct seasonal variability in discharge. Snowmelting processes, which occur from April till June, result into spring flood events. These events take place until July (Figure 3).

The HYPE model (Lindström et al. 2010), a semi-distributed and process-based hydrological model, is forced by daily precipitation and temperature and then calculates flow paths in the soil based on snow melt, evapotranspiration, surface runoff, infiltration, percolation, macropore flow, tile drainage, and lateral outflow to the stream from soil layers with water content above field capacity. Calculations start for the Hydrological Response Units (HRUs) in each sub-basin. The HRUs in HYPE reflect a unique combination of soil type and land cover, which are assumed to govern the flow paths and discharge from soils. A HRU has a set of parameters specific for the soil type/land cover combination, which is not catchment-specific but distributed all over the model domain. The HYPE model has been setup at the pan-European domain and named as E-HYPE (Hundecha et al., 2016).

Here we use the Ensemble Kalman Filter assimilation technique, which constitutes a stochastic formulation of the original Kalman Filter and simplifies the problem of the nonlinearity of the process by using Monte Carlo simulations. To increase the efficiency of the filter, the ensemble member generation proposed by Turner et al. (2008) is applied.

Figure 4 shows the KGE metric of agreement (overall agreement) and its decomposed terms (agreement in timing (r), volume (beta), and variability (alpha)) between the EO products and E-HYPE simulations (Gupta et al., 2009). In Umeälven, the agreement of snow variables decreases as the elevation increases. This is due to the long EO data gaps during winter (days in winter have a short duration affecting the accuracy of EOs). Nevertheless, the timing and the variability are well captured. Evaporation variables are better represented than snow variables. In this case, EO’s coarse temporal resolution (1 month) tends to smooth the variability in the simulations.

DA further affects the performance with ET assimilation achieving the highest improvements in Umeälven. The evaluation of the DA algorithm is done in term of streamflow (Q). Q is measured at 15 flowgauge stations and the improvement in performance is based on the comparison of Q before (open loop) and after assimilation of the ET product. The results show that the performance increases in most of the locations. Improvement is clear at the stations where the model already had a relatively good performance. This suggests that the model parameterization under certain conditions has strong constrains that limit the potential of assimilation and hence the improvements (Figure 5).

This study shows the potential of EOs to improve streamflow performance under certain conditions, and also point towards structural inconsistencies. The assimilation of EOs in hydrological modelling can also secure a right for the right reasons model. This opens the opportunity to produce water information systems and decision support tools based on near real-time EO products, setting a step forward in operational services.

The Ume River (Umeälven) in Sweden